A Harmonizer is a Powerful Holistic Healing Tool 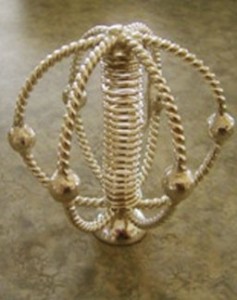 years ago I taught a workshop on Earth Acupuncture at the home of Gaela and Jim Morrison, who lived near Pagosa Springs, CO.  Gaela practices Geomancy and Feng Shui, while Jim is a sustainable green builder. The class installed copper rods on their property over the weekend, right after Jim had been written up in Architectural Digest for his sustainable green design.

On one of my many trips to the area I spoke with a woman who was diagnosed with breast cancer, referred by her physician, an oncologist from Texas. I visited her property, which showed no serious irregularities, yet a couple horses had behavioral issues and she had trouble with workers who were installing a patio fountain. Before I had even gotten in my car to leave from her ranch the first day, she had fired the fountain workers and one horse stopped displaying the misbehavior that had worried her and her ranch foreman. Before I left the property for the final time, she had purchased a silver personal harmonizer and started running the Environmental Clearing CD.

Her oncologist wove together the tapestry of traditional and alternative treatments and was known the world over. Within a week this physician, whom she traveled regularly to see, took her off more than 60% of the natural medications he had prescribed. Within a month, she was off all medicines and was juicing organic fruits and vegetables. All the cancer had disappeared! The horses were normalized in their behavior and she a couple boarder horses to the herd. Her gardens and greenhouse had fewer bug infestations and soil imbalances, as well.

FACT
For several months I have been attending the local chapter of the internationally known Society for Scientific Exploration (SSE), and I plan to join the group. I also have become a TEAM LEADER for Boulder County in a LinkedIn Group called, “First the Earth.” The subtitle is *HEAVEN ON EARTH* Eco-Holistic Model Cities, hosted by Mel (Melcir) Erskine-Richmond, Ph.D.

I invite all of you to explore this group, as I feel very connected with Mel as well as with some of the 700+ members I have been dialoguing with. I appreciate any comments or support.