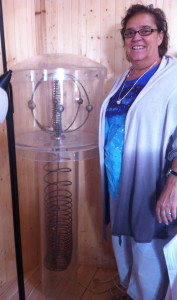 Karen Rice King was born in Albany, NY and grew up in a suburb of Pittsburgh, Pennsylvania.  She earned a BA in World Religions and Psychology from Western College for Women in Oxford, Ohio.

After a diving accident in 1972 Karen’s psychic abilities became heightened.  When she moved to Boulder, Colorado in 1975 she spent the next few years teaching Spirituality and Psychic Development at the Free School.

In 1990 she was involved in an auto accident that challenged the previous injuries.  However in her recovery she realized she needed to open a private practice as she studied to be a Global Shamanic Teacher and to do Dowsing for people and properties.

MEMBERSHIP IN PROFESSIONAL ORGANIZATIONS INCLUDE:

Geomancers, Feng Shui practitioners and Dowsers have been working with natural and man-made energies on properties for thousands of years.  They recognize the Ley lines and grid lines running in patterns of longitudes and latitudes around our Planet.  In our current era researchers are concerned about electromagnetic (EMF) pollution produced by modern technology as well as stresses created by natural Earth energies, such as underground water, rock strata and fault lines, and high mineral deposits in soil and water sources.

In 1991 King hosted Bill Reid and Slim Spurling for a workshop where they presented their research.  Calling themselves Geobiologists they discussed how they dowsed and diagnosed negative stress lines on properties that were producing health challenges and financial stresses.

By burying specially designed copper rods Reid and Spurling mitigated what they believed to be the causes of many complaints from home and business owners.  The federal government and independent scientists tested this work and found  it creates a Tensor Field comprised of Scalar waves which could have a dramatic positive influence on the WIFI and electrical challenges around a property as well as things like the water and mineral content in the soil.

Over the years King began doing the work while making changes based on her on research.  She stayed involved with both men, but particularly Spurling, while he recognized that her adaptations were successful.

Spurling became internationally known and in 1996 King with his permission, began changing some of the specifics and naming her work “Earth Acupuncture.”  She was recognized as a Master Dowser when she started her Earth Acupuncture Apprentice Program that same year.

King is sitll achieving amazing results with Earth Acupuncture and the Light-Life®Tools and is compiling lots of anecdotal research with the plans of publishing.  Two Phd’s have written a Sleep Study for Adults with Earth Acupuncture since Spurling’s passing in 2007 for her to launch.  King is traveling and doing workshops around the US and developing her program, while compiling a wealth of evidence for the benefits of this work and tools.